On September 12, 2019, former trumpet player and principal cornet player of the Amsterdam Concertgebouw Orchestra Freddy Grin died at the age of 93. 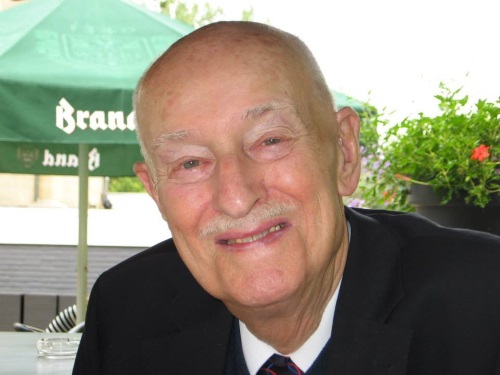 Freddy Grin came from a musical family. His father was the concertmaster of the AVRO radio orchestra, his mother was a pianist. His maternal grandfather was a violin player in the Amsterdam Concertgebouw Orchestra. As a young boy, Freddy received violin lessons from his father and his first trumpet lessons from Jan Eisenberger, trombone player with the AVRO orchestra. After six months with Eisenberger, Willem Burbach, principal trumpet of the orchestra, became his teacher. After that, Grin studied with Marinus Komst, principal trumpet of the Concertgebouw Orchestra. In 1941, he was appointed trumpet player with the Wind Orchestra of the Dutch Radio. A year later, he became second trumpet with the opera orchestra of the Dutch Broadcasting Company. He was appointed first trumpet player with the Dutch Chamber Opera on September 1, 1943, and from November 1, 1944 to April 24, 1945, he was a member of the Dutch Radio Symphony Orchestra. After a successful audition, Grin joined the Concertgebouw Orchestra on 1 June 1, 1945. Next to being one of the trumpet players of the orchestra, he held the position of solo cornet player until his retirement in 1984.

In 1947 he participated in the "Concours d’Exécution musicale" in Geneva, where he obtained a third prize (a first prize was not awarded that year).

He also remained active as a soloist after his retirement. He regularly performed with his wife the soprano Ina van Duyn.

Grin was an active member of the International Trumpet Guild and was one of the co-founders of Euro-ITG.