Arkansas State University held its first annual “Brass Fest” on September 24, 2022. This event invited brass players of all ages including around 100 area high schoolers to congregate to the A-State campus for a day of warmups, classes, and exhibits, and performances.

The event began with registration and a 9:30am welcome meeting. Classes began with warmups at 10am presented by the A-State brass faculty with Dr. Nairam Simoes leading the trumpets, Dr. Juli Buxbaum leading the horns, Dr. Bruce Faske leading the trombones, and Dr. Ed Owen leading the euphoniums and tubas. At 11am, the groups congregated in the Fine Arts Recital Hall for classes presented by Lee Harrelson and Wiff Rudd who discussed Brass Band and Forecasting Success, respectively. At 1pm, a dedicated exhibit hour was provided alongside a pizza lunch that was graciously provided by S.E. Shires. Masterclass performances began at 2pm in which two student ensembles and five student soloists were given the opportunity to perform for and receive comments from our guest artists.

Exhibits were provided by Thompson Music.

The final event of the day was a Gala Concert held at A-State’s Fowler Center for the Performing Arts. Solos and ensemble pieces were performed by the guest artists and featured A-State faculty and students. The concert program included:

My Mountain Top for Euphonium and Fixed Media - Andy Scott

Song for a Friend - Kevin McKee

This event was made possible by the International Trumpet Guild's Support of the A-State Trumpet Guild Chapter. 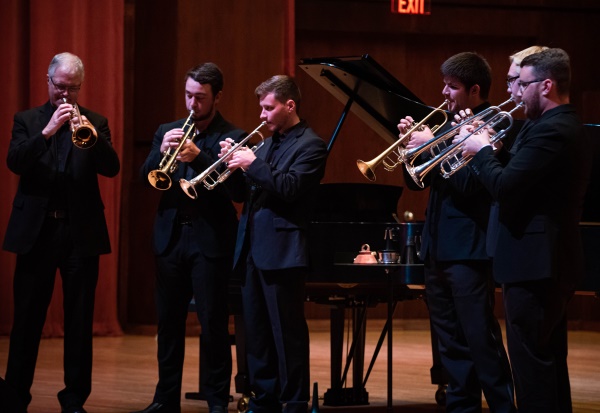